The heart of the financial district of the City of London might seem at first sight an unlikely inspiration for artistic endeavour yet it features in the work of one of our most famous Modernist poets - T.S. Eliot.  In the complex and challenging poem The Waste Land (1), published in 1922, there are many references to London landmarks and life in the city.  At the time of writing, Eliot worked as a bank clerk for Lloyds Bank in the City and must have had extensive knowledge of the banking system of the time.  Although the poem is full of both classical and modern literary references, a substantial part of it is set firmly in the real world of the City - and his daily working routine would have taken him through the streets he mentions - King William Street, Queen Victoria Street, Lower Thames Street, Moorgate and across London Bridge and along the River Thames.

Eliot conjures up the alienation and fragmentation of the modern world which characterised society in the aftermath of the First World War and which drove writers and poets of the time to experiment with different modes of expression.  In his lines you can determine the uncertainty accompanying modern city life and the ensuing loss of personal identity, where the individual seems little more than a cog in a gigantic machine. 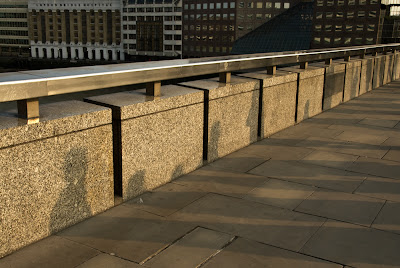 His 'unreal city' is peopled with ghost-like forms like the souls in Dante's Inferno. Sighing and shuffling along, their eyes on the ground in front of them, they flow over London Bridge to begin their monotonous day at their desks:

"Unreal City
Under the brown fog of a winter dawn,
A crowd flowed over London Bridge, so many,
I had not thought that death had undone so many.
Sighs, short and infrequent, were exhaled,
And each man fixed his eyes before his feet.
Flowed up the hill and down King William Street,
To where Saint Mary Woolnoth kept the hours
With a dead sound on the final stroke of nine." 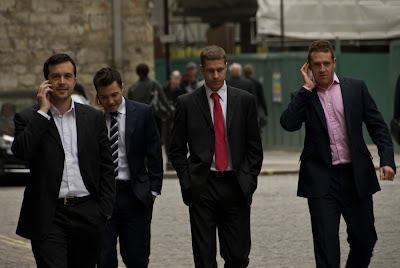 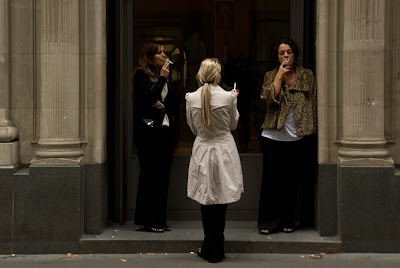 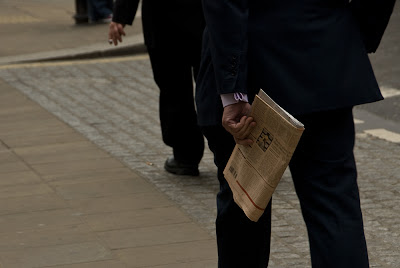 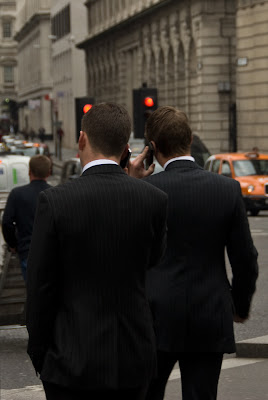 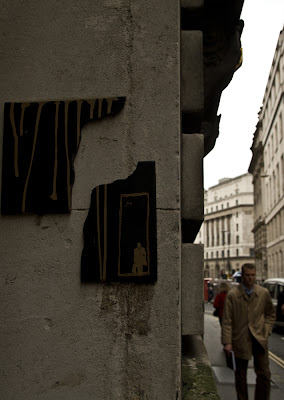 At the end of the day people go home to their humdrum lives and petty passions:

"At the violet hour when the eyes and back
Turn upward from the desk, when the human engine waits
Like a taxi throbbing waiting...."

And all the while the River Thames courses through the city "sweet Thames, run softly till I end my song....." bearing witness to London's past and present, where  "the barges wash drifting logs down Greenwich reach past the Isle of Dogs" and where:

"Elizabeth and Leicester
Beating oars
The stern was formed
A gilded shell
Red and gold..." 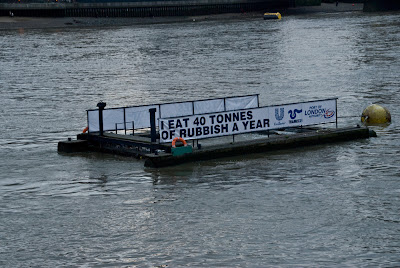 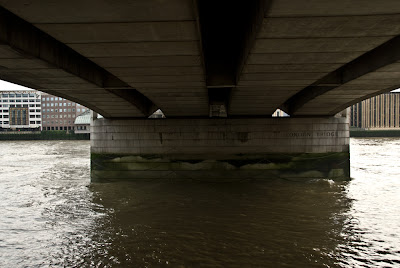 Eliot's 'unreal city' is of course universal, and can be seen as a metaphor for the poverty of spiritual life in modern metropolitan society, probably even more relevant today than it was almost a century ago.  Dodging the crowds of people streaming across London Bridge at the end of yet another hard day's grind, I felt glad that I was just an observer..... 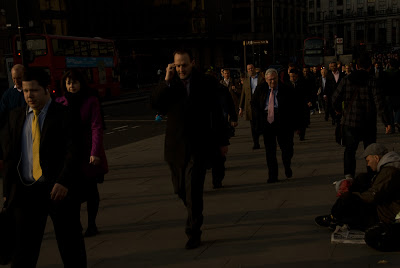 (1)  For an interesting discussion on the themes of the poem, listen to this episode of  Melvyn Bragg's In Our Time